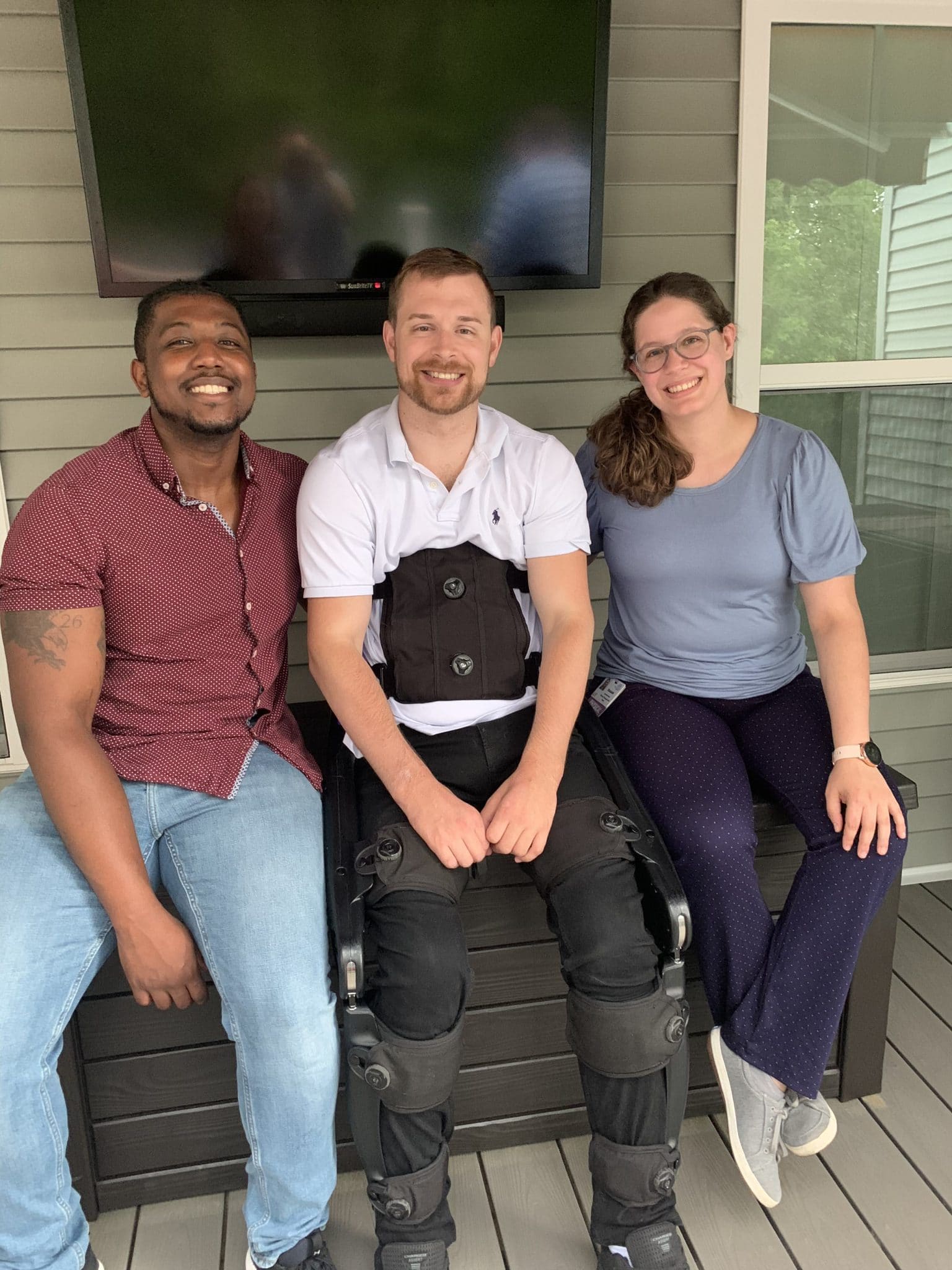 On a summer evening, Josh Smith knelt on his deck as he awaited his girlfriend, Grace Thompson, ring in hand. But Josh’s journey to arrive in that kneeling position was not easy – it took ingenuity, teamwork, and a bit more planning than the average proposal.

Seven years ago, Josh was at the beach with some friends when he dove into a wave and hit a sandbar. He sustained a spinal cord injury and was immediately paralyzed from the neck down. After surgery to stabilize his spine, Josh was transported out of state for rehabilitative care for four months before returning to Richmond.

Josh began outpatient therapy services at the Sheltering Arms Hanover clinic and participated in NeuroFit, our exercise recovery program for individuals with neurological conditions, until 2016 when he began working out on his own and returned to work full-time.

While Josh was participating in outpatient therapy, Sheltering Arms received its first robotic exoskeleton. “I was able to use that periodically when I would go to therapy and thought it was really cool,” Josh said. “When it came time to propose, I really wanted to get down on one knee and I was trying to think of something that could hold me in a kneeling position. The engineer in me thought about the exoskeleton.”

So, Josh reached out to one of his former therapists, Amber Walter, PT, DPT, NCS, who is now clinical science manager at Sheltering Arms Institute, a collaboration with VCU Health, to see if it would be possible to use the exoskeleton to pull off his dream proposal. Josh recalls Amber’s reply, “She said, ‘We can try it. I’ve never done it before but I’m sure we can figure it out!’”

“Secretly, I went to the Hanover clinic twice to work out the kinks of how this would work and how we would do it,” Josh said. “Everything went smooth even the first time we tried, so that was encouraging.”

Grace was surprised to say the least, as you can see from her reaction in this video of the proposal. “She didn’t even know what the exoskeleton was and then seeing me stand up was another surprise because up until that point, she had never seen me stand,” Josh said.

Since Josh is no longer a current patient, Lizzie and Alexander worked with him outside of regular appointment hours to practice the proposal, staying late and even going to Josh’s house the evening of the proposal to make his dream of getting down on one knee a reality.

“They were great to work with and went above and beyond. The therapists didn’t treat me like a patient, but as a friend,” Josh said. “I am super grateful that they were willing to take time out of their personal lives to help me. They welcomed me and were super supportive.” As for what’s next for the couple, the future is bright. Grace is heading back to school to become a nurse and Josh continues to work full-time and participates on Sportable’s adaptive rugby team. An October 2022 wedding is planned.