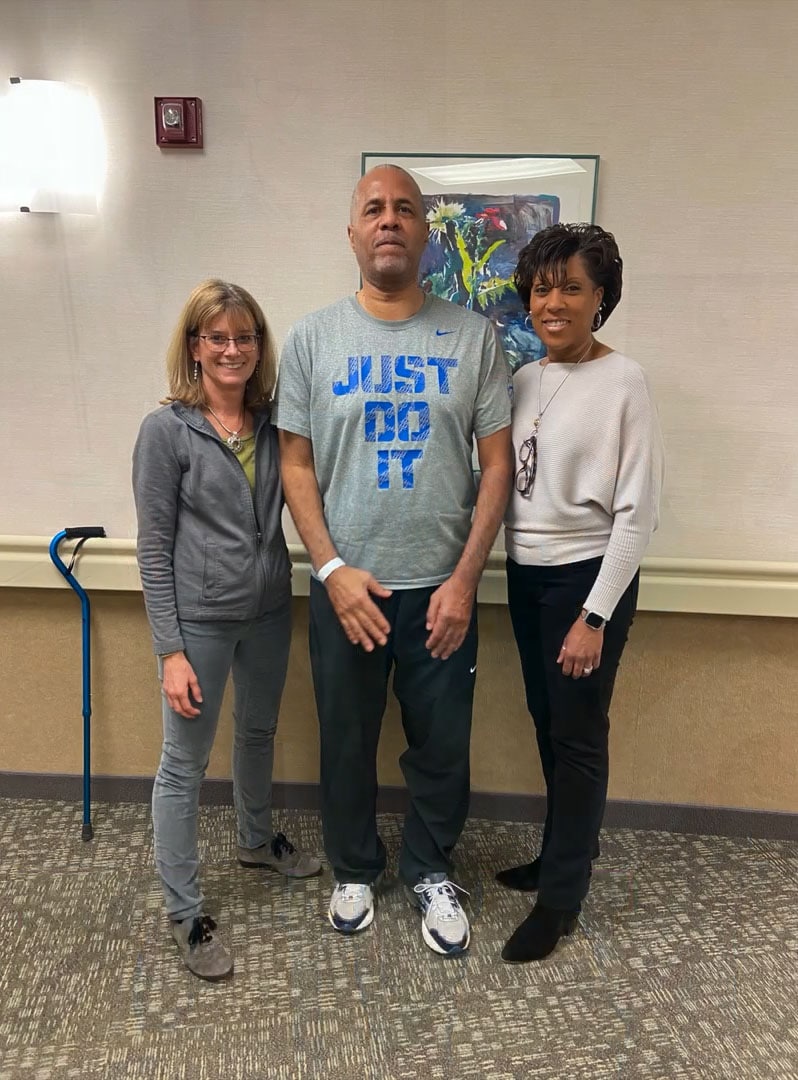 It was the middle of the night when 62-year-old Gary Lee got out of bed to use the restroom. When he did, he became dizzy and kept bumping into the walls. “I told my wife something’s not right,” Gary recalls.

Gary was admitted to St. Francis Medical Center where he stayed for several days. “I was in a wheelchair, I was unable to walk. My stroke was on my left side, so everything on my left side was weak. My speech was off a little bit,” Gary said of the stroke’s impact on his body.

He transferred to a room at Sheltering Arms and quickly began various types of therapies to recoup his lost function. “A lot of therapy on his leg strength, his arm strength. His therapy was focused on strengthening his left side, helping him get the grip back in his left hand and to give him that stability when he did attempt to walk on his own,” said Ivy who spent every day with her husband while he was admitted to our rehab hospital.

After about a month of intense physical rehabilitation, it was time for Gary to go home. Immediately following discharge, he began occupational and physical therapy on an outpatient basis and continued doing “lots of exercises, lots of rest and a lot of working with my left arm.”

By pushing himself and attending therapy sessions regularly, Gary built up his strength and now has an at-home routine he follows to stay motivated and active. He said, “[My therapists] gave me things to do while I’m here at home, which is what I’ve been doing every day. I’ve been trying to get out and walk every day and I went out and got some weights. I do weights with my arms and I try to stretch and strengthen my hand.”

His advice to anyone going through a challenging time is to “Keep praying and keep a positive attitude. Like NIKE would say, ‘Just Do It.’ I always try to motivate myself to do more because I want to get well and do well.”

Gary’s strategy is paying off and he is doing well as you can see in this video he made of his progress. “I tried to document his progress and although it was sometimes difficult for him to watch it, I think it’s helped show his progress. I think being the patient, it’s hard for him to see or recognize his progress when he’s still trying to get to 100 percent, but looking at the video and the pictures and putting it together, I think has helped him to see how much he has progressed and how much the therapy has truly helped him,” Ivy said.

He can now do a number of things he wasn’t able to do previously such as bathe himself, put his socks and shoes on, go up and down the stairs and cook for his wife. “When I retired, I told my wife I would cook for her before she went to work. So, I told the therapist, I want to go back to cooking for my wife again, which is what I’m doing now,” Gary adds.

The Lees would like to extend heartfelt gratitude to their entire care team. “They treated me very well,” Gary said about the care he received. “It definitely takes a special person to do what they do and they all did a beautiful job.”

“Words can’t express how much they have helped both of us, how much they’ve supported us during this process. Even some of the former patients who come back to support the patients like Duff Poage. His conversations with my husband were exactly what he needed. ” Ivy added. “I’m just so thankful that he’s still here.”

For more info on our COVID-19 safety protocols, Visit shelteringarms.com/covid-19