Returning To Work With Strength And Confidence 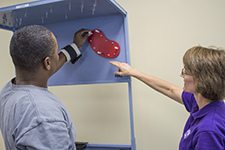 Working in law enforcement, Robert Davis was used to staying active and at the top of his game. After sustaining an on-the-job injury, however, everything changed. Robert underwent surgery on his left shoulder followed by three months of physical therapy at an orthopedic clinic. Still experiencing a limited range of motion and significant pain, his physician indicated that options moving forward included another surgery, manipulation, or the Industrial Rehabilitation Program at Sheltering Arms.

Anxious to return to work and wanting to avoid another surgery, Robert decided to try industrial rehabilitation. Work hardening, part of the overarching Industrial Rehabilitation Program at Sheltering Arms, integrates work simulation, physical conditioning, biomechanics, and education to promote a safe and efficient transition back to work. Patients work with a physical therapist toward job-specific goals and targeted strengthening several days a week.

“It got me into the mindset that I’m going to work today. It’s been therapy for me mentally and physically,” says Davis.

Robert saw improvement in his strength and range of motion within two weeks of starting the program. His therapist, Lynn Hewette, PT, helped him to stop guarding his injured shoulder and safely work through the pain thresholds. She also encouraged him to gradually take on more, whether it was lifting additional weight during therapy or returning to tasks at home such as mowing the lawn, in preparation for the physical demands of going back to work.

“You can see that they take a special interest in their patients and seeing them get well,” he says of the staff in the work hardening program. “To me, you can’t get any better therapy than that.”

Work hardening helped him regain control in other areas of his life as well. Since his injury, Robert had become sedentary and sought comfort in food, resulting in a 26-pound weight gain. The intense physical activity of the program, coupled with the increased motivation it elicited, has helped him to lose 20 of those pounds.

“I feel like if this worked for me, why not share it with someone else,” he adds. “I would highly recommend the program.”